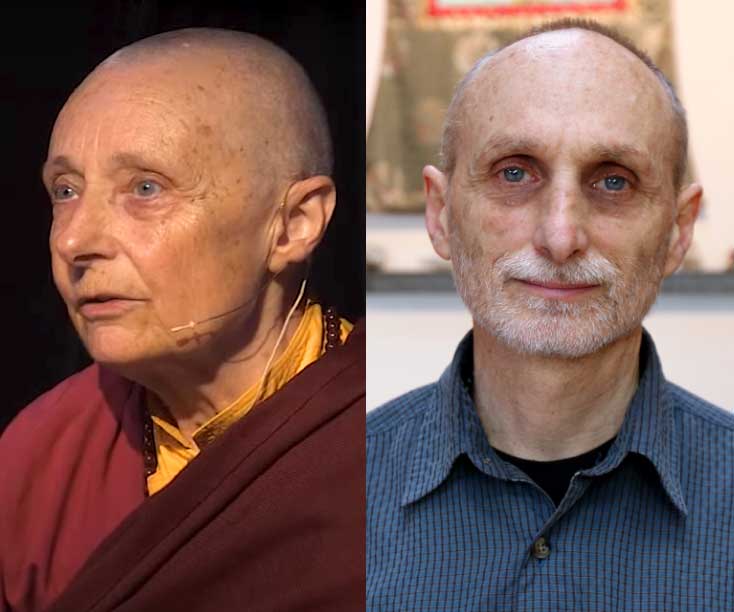 On June 13, 2020, after meditation, we learned from two different teachers on the topic of Transforming Suffering.

At Teachers’ Corner last Saturday, we listened to two Dharma talks, one by Jetsunma Tenzin Palmo, another by Kittisaro. Tenzin Palmo discussed one aspect of Buddhist theory about the origin of suffering — the “three poisons” or the “three unwholesome roots” — and how becoming aware and mindful of them is the way to ending suffering. We followed that with a talk both different and the same, touching on many of the same ideas but in terms of a personal journey.

In the discussion afterwards, the group talked about the connection between Kittisaro’s meditation advice and art and why people who fundamentally want peace end up in conflict. We concluded with a very personal exchange of experiences with conflict and racism.

The videos we shared during our session are posted below: “Wheel of Life Samsara in the Raw” by Tenzin Palmo; and “Engaged Dharma in a World on Fire” by Kittisaro.

From the Teachers: Transforming Suffering

“Wheel of Life Samsara in the Raw” – Tenzin Palmo*

* Jetsunma Tenzin Palmo is a bhikṣuṇī in the Drukpa Lineage of the Kagyu school of Tibetan Buddhism. She is an author, teacher and founder of the Dongyu Gatsal Ling Nunnery in Himachal Pradesh, India. She is best known for being one of the very few Western yoginis trained in the East, having spent twelve years living in a remote cave in the Himalayas, three of those years in strict meditation retreat. On 16 February 2008, Tenzin Palmo received the title of Jetsunma (reverend lady) in recognition of her spiritual achievements as a nun and her efforts in promoting the status of female practitioners in Tibetan Buddhism by the head of the Drukpa Lineage, the 12th Gyalwang Drukpa.

“Engaged Dharma in a World on Fire” – Kittisaro**

The follow recording contains two Dharma talks. Kittisaro’s talk is the first one running from 04:40 – 31:46.

** Kittisaro was ordained with Ajahn Chah in Thailand in 1976. During his 15 years as a Buddhist monk, he helped found Chithurst and Hartridge Monasteries in the UK. Since disrobing in 1991, he has taught meditation internationally. He is a core teacher at Insight Meditation Society in Massachusetts, guiding teacher of Chattanooga Insight in Tennessee, and a member of the Teachers Council at Spirit Rock Meditation Center in California. He and his wife founded Dharmagiri Sacred Mountain Retreat in South Africa, and Sacred Mountain Sangha, a public charity in Sebastopol.