Last Saturday, on July 13, 2019, we studied The Ten Paramitas of Mahayana Buddhism — Dhyāna (Meditative Absorption / Stability of the Mind).

Following meditation, we started Dharma learning session with a quick discussion on last week’s “homework” — generating energy in thinking of others’ good qualities.  Then, we shared two Dharma talks on the topic of Dhyāna (Meditative Absorption): the first one is audio only, given by Sensei Robert Thomas; the second one is a video, given by Lama Shenpen Hookham. Afterwards, everyone chimed in and shared their thoughts on the teachings, including whether or not one can get addicted to meditation.

Below is a copy of our handout, “The Perfection of Meditation – Dhyāna Paramita” Dharma talk audio, and “The Six Paramitas – Dhyāna” Dharma talk video. You will also find questions we suggested for discussion, and our homework at the end of this page. Happy learning!

Dhyāna (Sanskrit) or jhāna (Pali) — commonly translated as “meditation,” “meditative absorption,” or “meditative concentration.” In her talk on Dhyāna Paramita, Lama Shenpen Hookham translates “Samten,” the Tibetan word for Dhyāna, as “stability of the mind.” She also describes it as a “focusing of the energy (virya) towards a particular end – towards Prajña Paramita: deep insight in seeing through the illusion of samsara and waking up.” Prajña needs the support of a stable mind to be sustainable. But she cautions us not to develop concentration for its own sake – we could get attached to the bliss / extreme joy arising from concentration which could then block us from developing prajña.

The five main types of meditation:

Many sutras mention dhyāna / jhāna. The five main types of meditation in these sutras are:

“The Perfection of Meditation – Dhyāna Paramita” — Dharma talk by Sensei Robert Thomas *
We listened to the second half of the talk during our session, from 16:48 to 39:32 minutes 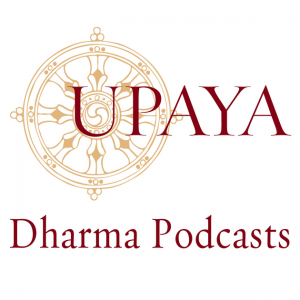 * Sensei Do-On Robert Thomas is a Zen Buddhist priest in the lineage of Rev. Shunryu Suzuki Roshi. He has been practicing Zen Buddhism since 1993, was ordained as a priest in 2000, and received Dharma Transmission from his teacher, Zoketsu Norman Fischer in 2008. He had served as a leader of the three San Francisco Zen Center practice centers.

** Lama Shenpen Hookham was a student of Chögyam Trungpa Rinpoche, founder of Shambhala. She lived as a nun for 6 years in India in the 1970s, and was ordained by the 16th Karmapa, head of the Karma Kagyu lineage of Tibetan Buddhism. She trained for over 50 years in the Mahamudra & Dzogchen traditions of the Kagyu-Nyingma schools, and is fluent in Tibetan.