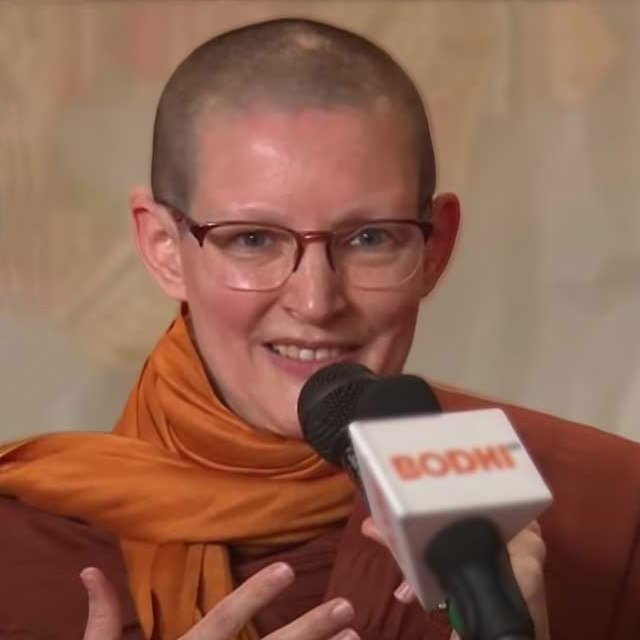 On March 13, 2022, after meditation, we honored Women History Month by sharing a talk from Ven. Tathālokā on the topic of “The Role of Bhikkhunis.”

After meditation, we briefly shared the obstacles women faced in pursuing full-ordination within the monastic orders to become bhikkhunis — female monks (nuns), especially in the Theravada tradition. The article, “Bhikkhuni Ordination: Buddhism’s Glass Ceiling” on Tricycle.org provides a succinct summary of the challenges and the recent history concerning the issue.

In her Dharma talk “The Role of Bhikkhunis in Society Past and Present”, Ven. Tathālokā pointed out many passages in the Tripitaka where the Buddha affirmed the importance of a healthy bhikkhuni sangha — one of the vital components of the Fourfold Assembly (catuparisā), which refers to the four groups of the Buddha’s followers: monks, nuns, laymen and laywomen. We have also learned that the ability of women to learn, to practice, to teach, and to protect the Dharma, and to attain liberation was never questioned in the Suttas by anyone, except by the demon Māra.

The Venerable also stressed the unique gift that female monastics can offer laywomen practitioners as teachers, as role models, and how their presence can provide a sense of kinship, legitimacy and acceptance from the monastic order.

The video we shared during our session, and additional resources are posted below. Happy learning!

A few Pali words used in the talk:

From the Teachers: The Role of Bhikkhunis

Dharma Video: The Role of Bhikkhunis in Society Past and Present

The Role of Bhikkhunis in Society Past and Present — by Ven. Tathālokā *


* Venerable (Ayya) Tathālokā is an American-born member of the Buddhist Monastic Sangha, the first non-Sri Lankan woman to receive bhikkhunī ordination into the Theravāda tradition in modern times. She first received instruction in Mindfulness and Insight practices at age ten, further studying and training with Indian, Korean, Thai, Sri Lankan and Burmese meditation teachers, including the Thai forest traditions of the most venerable Ajahn Mun Bhuridatta, and the Burmese Vipassana meditation masters Sayadaw U Pandita and Pa-auk Sayadaw. Her practice and teaching are profoundly influenced by the Buddha’s teachings as contained in the canonical Early Buddhist suttas, together with the teachings and practices of Forest and Insight meditation traditions.

Ven. Tathālokā entered monastic life as an anāgārikā in 1988, received pabbajjā with her senior bhikkhunī mentor in Korea in 1993 followed by sāmanerī precepts in 1995, and received bhikkhunī upasampadā (full ordination) with the Sri Lankan Sangha in California in 1997, with the late Ven. Havanpola Ratanasāra Mahāthera as preceptor. After further studies, a three-year retreat, and time back in Asia in Sangha university and on tudong in Thailand, in 2005 she returned to the U.S. There she co-founded Dhammadharini Support Foundation together with the Dhammadharini Sangha, the first monastic community for Theravāda bhikkhunīs in the western United States. Inspired by Buddhist Forest traditions, in 2008, she co-founded Aranya Bodhi Hermitage, and later Dhammadharini Monastery. In 2009, she became the first contemporary non-Sri Lankan woman to be appointed a bhikkhunī preceptor.

A few suttas mentioned in the talk:

A few female disciples of the Buddha mentioned in the talk:

Giving It All You’ve Got