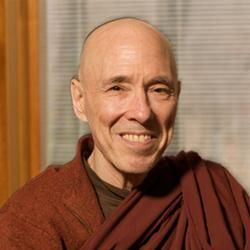 A portrait of the Venerable Bhikku Bodhi

On November 13, 2021, after meditation we listened to a talk from the Venerable Bhikku Bodhi about a piece of the Buddha’s advice for our speech. In particular, the Buddha says, as recorded in The Book of Fours of the Numerical Discourses (Aṅguttara Nikāya), that a good person does not speak of the faults of others unless absolutely necessary, but will readily talk about others’ virtues. Conversely, a good person does not speak of their own virtues unless pressed, but will readily admit their own faults.

This is a clear, explicit rule. The teacher followed this statement by bringing in complications and subtleties. He referenced other suttas in which the Buddha spoke on the same topic. For example, the Buddha also says that a good person should speak praise of others when the praise is accurate and timely (which easily matches the first sutta). A good person also speaks criticism of others when the criticism is accurate and timely (which might initially seem to not fit as well).

A theme which emerged is that when speaking of either the good or bad qualities of another person, both the timeliness and the intent of the speech matter. Is critical speech spoken with an attitude of respect and loving-kindness toward the other person? Is it accurate? Does it come at a time and place where it can have a positive impact? With regards to praise, speaking praise at appropriate times and places can be helpful to draw the attention of others to examples of good behavior. It can also have positive effects on the speaker. Praising others can help the speaker to be more open, generous, and magnanimous.

After the talk, the group’s discussion turned toward additional complications which the teacher hadn’t touched on. For example, what about “speech” which remains inside our heads and is unspoken? Perhaps mental criticism of others should also be rare, and praise easy and frequent. An additional complication is that not everyone likes to be praised in the same way. While some people appreciate public recognition, others might genuinely be hurt by bringing attention to them in front of a group. For praise, as well as blame, one should pick an appropriate time and place. For some people, that might be in public, and for others, in private.

This month’s talk dealt with some very practical issues of speech which many of us encounter in day to day life. While the initially simple instruction became more complex as the discussion unfolded, the teacher’s final advice was this: speak from a place of loving-kindness, and that intent will guide you.

From the Teachers: Praise and Blame

After completing his university studies he traveled to Sri Lanka, where he received novice ordination in 1972 and full ordination in 1973. For many years he was the president and editor of the Buddhist Publication Society in Sri Lanka.

He has been living at Chuang Yen Monastery since 2006. Ven. Bodhi has many important publications to his credit either as author, translator, or editor, most recently a translation of the entire Anguttara Nikaya, The numerical Discourses of the Buddha (Wisdom Publications 2012).

In 2008, together with several of his students, Ven. Bodhi founded Buddhist Global Relief, a non profit supporting hunger relief, sustainable agriculture, and education in countries suffering from chronic poverty and malnutrition.

Gratitude as a Dharma Gate

Getting Unstuck – Know Your “Shenpa”