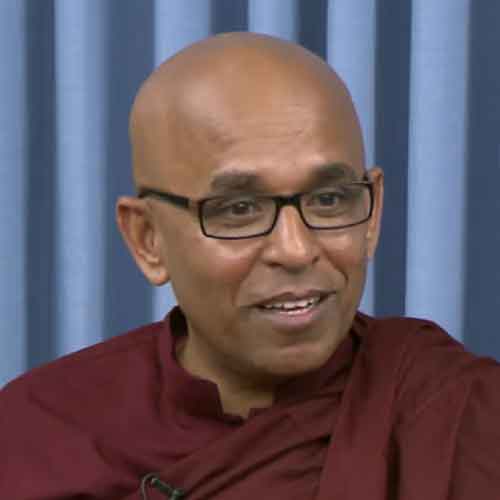 On Sunday, December 11, 2022, after meditation we watched a Dharma talk from Bhante Sujatha entitled “A Buddhist Approach to Handling Difficult Thoughts and Emotions.”

In his talk, Bhante Sujatha addresses the problem of troublesome thoughts. He starts by addressing the misconception that the purpose of meditation is to get rid of thoughts and feelings entirely. He says that the word for a person with no thoughts is “dead”, and uses his own experience to say that even a Buddhist monk with decades of practice in meditation still has constant wandering thoughts.

Meditation can help to deal with troublesome thoughts, but just meditating isn’t enough. Bhante Sujatha is clear that no matter how much experience one has with meditation, it’s possible to still be an unpleasant, uncompassionate person if one’s meditation doesn’t inform one’s life. He calls this “sitting on the toolbox” — we need to make use of the tools we learn in meditation.

So how should we deal with our intrusive thoughts or emotions? The two common approaches are “suppress” and “express”. Neither is a good idea. Either approach can lead to even more problems with the thoughts we wanted to get rid of, and can be bad for the people around us. Bhante Sujatha says that the Buddha teaches a third way, which Bhante calls “analyze”. (One might also say something like “observe”, or “inquire”.) Let the thoughts be present, but be aware that they’re there. Don’t let the thoughts run away with you.

In the group’s discussion after the talk, we were appreciative of Bhante Sujatha’s advice. “Sitting on the toolbox” is a great analogy, and a good reminder to not let meditation stay on the cushion. At the same time, the advice to neither suppress nor express, or to observe but not feed one’s thoughts, is not quite as easy as Bhante makes it out to be. When considering Bhante’s discussion of how wandering thoughts are part of being human, we also pointed out that wandering thoughts can sometimes be helpful, if they’re used properly. Planning for the future, which is one way that thoughts can take off, is (potentially, at least) useful.

Bhante Sujatha’s advice is worth hearing for yourself — scroll down to watch the video.

From the Teachers: Handling Difficult Thoughts and Emotions

NOTE: We apologies for any advertisement you may see during video play. These ads are inserted into the videos by YouTube. Neither the Theosophical Society (publisher of the recording), nor Chicago Buddhist Meditation Group profits from these ads. Thank you for your understanding.


* Bhante Sujatha was born in 1967, in Kandy, Sri Lanka. Even as a child, he knew that he wanted to be a Buddhist monk. At age 11, his parents finally permitted Sujatha to enter the monastery and train under Venerable Dhamawasa Thero and Venerable Muditha Thero. In 1993, he left Sri Lanka for Brisbane, Australia, where he taught meditation and Buddhism at the Sri Lankarama Buddhist Monastery. Sujatha came to the United States in 1997 and helped establish the Great Lakes Buddhist Viharalived in Michigan.

The founder and Spiritual Director of the Blue Lotus Temple and Meditation Center in Woodstock, IL, Bhante leads a regional congregation and teaches loving-kindness to people seeking the art of contentment worldwide. Bhante was awarded the highest honor within his lineage when he was named the Chief Sangha Nayake of North America in 2013. Bhante is the author of several books including “Sitting on the Toolbox: Buddha’s Wisdom for a Joyful Life” (written with Stacey Stern), which won the Nautilus Award in 2018.