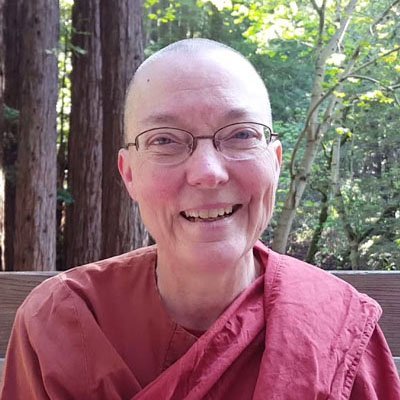 On October 9, 2021, after meditation we watched a Dharma talk by Ayya Santussika titled: “Giving It All You’ve Got.”

The teacher quoted Ajahn Chah who said that in everything that we do, we should give it all we’ve got. That applies to our practice – meditation and Dharma study – but also to everything that we do in our daily lives. Whether it’s sweeping the floor, cleaning the bathrooms, going to bed to sleep – in every moment, give it all we’ve got. That means being present, mindful, energetic, and joyful in doing whatever that we are doing at that moment.

At the same time, we need to look at what it is that’s driving us behind our actions. Is there an underlying sense of self and ego that’s driving us? For example, meditating for two hours could be a sincere practice but if we are doing that just so we can have the bragging right later to tell others that we had sat for so long, then we aren’t really “giving it all we’ve got” for the right reason. On the contrary, we would stress out whether we succeed or not, because we would be easily swayed by the eight worldly winds (gain & loss, praise & blame, fame & disrepute, pleasure & pain). Yet, stress is exactly the antithesis to our practice. When we give it all we’ve got but without this sense of self, we would be able to relax and be truly joyful, i.e., “no self, no problem.” It is also important to notice our tendency towards guilt, she said – for example, feeling guilty that we are watching TV instead of meditating.

Know that there is no guilt in Buddhism – there is only remorse and regret for something we truly did wrong, and that’s very different than the concept of guilt. The teacher reminded us to use the five precepts to guide us – watching Netflix and reading a novel doesn’t break the five precepts! If we find we are doing any activities as an escape from our feelings, however, then we need to turn towards those feelings in order to work through them. But if it’s just about relaxing, there is nothing wrong with it – we should just relax with all we’ve got. Balancing daily activities with our more formal practice, while also bringing practice into everything that we do, we give it all we’ve got while experiencing joy instead of tension, and we develop trust that this would help us discover true freedom.

During group discussion, we shared appreciation for being “given permission to relax” by the teaching. Knowing that the five precepts are our guide also helps ground us in focusing on our actions and consequences. And we discussed the importance of turning towards our feelings without jumping to labeling them as things like “guilt,” “failure,” and such. By being open and aware, it helps us diminish our sense of self and be able to see things more clearly, thus responding to each situation with skillfulness.

From the Teachers: Giving It All You’ve Got

“Giving It All You’ve Got” – by Ayya Santussika *
– A recording of Ayya Santussika’s dhamma talk and Q&A with the Theravada Buddhist Community Toronto on March 14, 2021.

* Ayya Santussika, born in Illinois in 1954, entered monastic life as an anagarika (eight-precept nun) in 2005, then ordained as a samaneri (ten-precept nun) in 2010 and a bhikkhuni (311 rules) in 2012 at Dharma Vijaya Buddhist Vihara in Los Angeles. She began meditation practice in the 1970’s but didn’t meet up with the Dhamma until 1998 when her son moved to Thailand to become a monk in the Ajahn Chah lineage of the Thai Forest Tradition. In 2003 she formally became a student of Ajahn Pasanno. In 2004, she spent time in Australia with Ajahn Brahm and at Ajahn Kalyano’s monastery near Melbourne where she met Ajahn Plien, whose teachings strongly impacted her development. With a gradual deepening of her faith in the Three Jewels, it became clear to her that she wanted to become a Theravada Buddhist nun.

In 2012, with the help of Venerable Bhikkhu Bodhi and her son, Ayya Santussika started Karuna Buddhist Vihara, a neighborhood Theravada monastery for bhikkhunis now located in Mountain View, CA. She teaches Dhamma as it applies to life experience, drawing from the Pali Canon. She holds BS and MS degrees in computer science, and a Masters of Divinity degree after completing a four-year interfaith seminar program to become a minister.