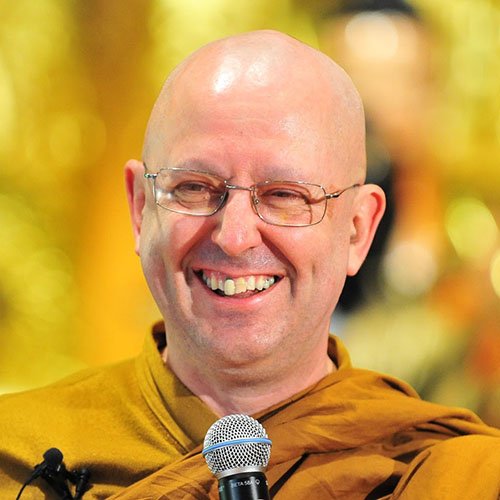 On October 9th, 2022, after meditation, we watched a Dharma lecture by Ajahn Brahm titled: “Facing Difficult Situations in Life.”

Ajahn Brahm taught that when we face crises and other difficult situations, or are feeling stressed out, instead of blaming others or feeling angry and upset, we can, instead, find ways to transform that into something positive. He gave an analogy of someone stepping in dog poop – instead of scraping it off right away, how about bringing it home and then using it as fertilizer for, say, the mango tree in your garden? He quoted his teacher, Ajahn Chah, who said that if we blame someone, it’s like having an itch on your head and you scratch your bum – you won’t solve the issue but will end up with two itches instead!

With our feet on the ground, and opening the door of our heart – feeling with the heart instead of just thinking with the head – we learn to take difficult situations on board, learn from them, forgive, and let them go; so that we do not stay angry or develop ill-will.

He also shared a key moment early in his monkhood, when he faced a frustrating situation that upset him greatly, another monk said to him: “the doing is the easy part, thinking about it is the hard part.” He said that teaching has gotten him through many difficult situations in his lifetime ever since. We expend so much energy in thinking and worrying about tough situations, it drains us greatly – whereas if we just do it, it’s probably not as hard as we had thought.

During the audience Q&A, Ajahn Brahm reminded us to not be angry about being angry, or be anxious about being anxious – at least take that second level off when we have negative feelings. Be OK with being angry and being anxious. And he said some good “circuit breakers” we can use are to just go outside, get real, be in nature, take off your coats to feel the cold. Use nature as therapy. Finally, he said if someone directs their anger at you, saying unkind things to you – instead of reacting, we can just stay silent in order to give that person a chance to reflect on what they just said. Often, that opportunity to reflect is enough to make someone realize they probably shouldn’t have said something so unkind.

In group discussion, everyone shared their main takeaways from the lecture, such as: realizing we make our own choices and therefore we can make different choices; the power of giving space for reflections instead of acting impulsively; and how we can learn to not overthink which tend to lead to us sitting in suffering unnecessarily.

From the Teachers: Facing Difficult Situations in Life

During our session, we watched the following video.  What do you think?


* Ven. Ajahn Brahmavaṃso, or simply Ajahn Brahm, is a renowned British-Australian Theravada Buddhist monk. Before becoming a monk, he studied Theoretical Physics at Emmanuel College, University of Cambridge in the late 1960s and taught in a high school for one year before traveling to Thailand to become a monk. He was ordained in Bangkok at the age of 23, and subsequently spent 9 years studying and training in the forest meditation tradition under Ajahn Chah. Currently Ajahn Brahm is the Abbot of Bodhinyana Monastery, in Serpentine, Western Australia. He is invited to give numerous lectures globally each year, and is an author of several books including Don’t Worry, Be Grumpy, and Who Ordered This Truckload of Dung?