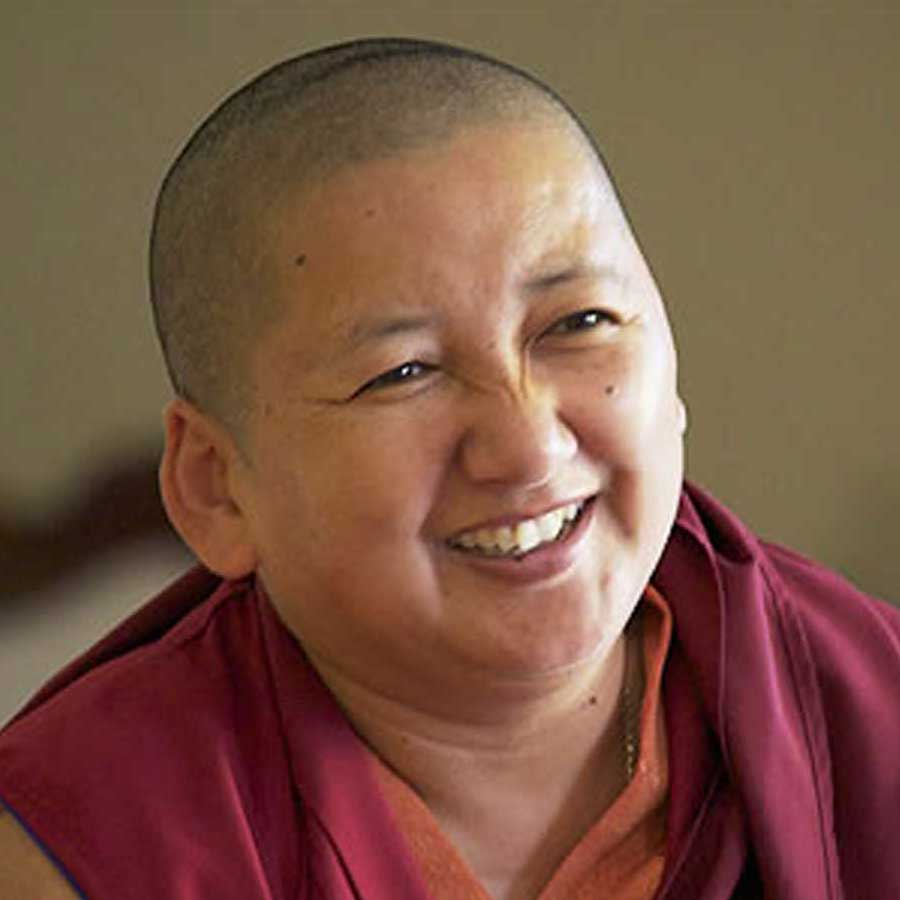 On July 10, 2022, after meditation, the group watched three short Dharma teachings by Her Eminence Mindrolling Jetsün Khandro Rinpoche, all of which were given in response to practitioners’ questions, explaining in various ways, how practice can be simple and effortless.

In the first talk, “Effortlessness in Meditation Practice,” she explained that when we truly understand and have an irreversible confidence in the value and preciousness of practice, instead of thinking of there being “something to do,” then practice would be effortless, much like how we would usually not forget our car keys and cell phones when we leave the house. In addition, if we have expectations, then we would have to have effort; whereas if it’s beyond expectations, then effortless. When any grasping falls apart, where would there be any need for any effort? For some of us, we may find that we need to exert effort before we realize there is nothing to grasp, which is OK too. As we experience a glimpse of there being nothing to grasp, that would loosen a bit our effort, then the result becomes the cause and the cause further deepens. Natural effortlessness is where you find there was neither a cause nor a result to expect from the cause.

In the second talk, “Ignorance is Clever so Be Careful,” Her Eminence taught that practice is actually very simple. It just asks us to have compassion and devotion. However, our ignorant ego loves to complicate things because it feels like if something isn’t very difficult then it shouldn’t be appreciated. The “sweating out of it” feeds our ego. To surrender to the absolute true nature is simple – it just asks that we don’t be so clever; but this becomes an affront to our ego. When in fact, Buddha taught that enlightenment is simply: “be true to your intrinsic nature, and remain there.” It’s just being silent and still, here and now. Yet, our ego likes to take the “scenic route,” taking us on a big detour. She said the courage that really is required of a meditator is to be able to understand and appreciate the vastness and the profoundness of simplicity. Surrendering is being able to not pretend to be something that you don’t need to be. However, that’s the greatest attack on the ego, and therefore the most difficult thing to do.

In the last talk, “Being Hard on Yourself,” Rinpoche provided an interesting definition of what being hard on oneself means to a practitioner – it means being absent of wisdom and skillful means to understand the situation and conditioning, and therefore traveling on a path that leads to more deluded thoughts. For example, if we don’t understand what causes us to be angry, we might force ourselves to not be angry when we are taught we should not be angry, and that would lead to us being hard on ourselves when we do become angry. On the other hand, if we are on a path that’s freeing us from deluded thoughts or negative thoughts, it may be a hard process but we are actually being kind to ourselves. She also reminded us of the complex web of interdependence and karma, where there are many conditions that we cannot know or control. While we should aspire to be a vehicle to liberating all sentient beings, we should not take it so literally to think that we must carry everyone on our own shoulders. Karma may mean that we are not the ones rowing the boat that carries sentient beings, but are just a passenger in the boat or just the person who pushes the boat off the bank. We can all relax a bit. Doing a little bit more than what we are capable of is already enough; don’t pressure ourselves into much more than that.

In the group discussion, everyone expressed how they were in awe of Rinpoche’s articulate and profound teachings, and how good a teacher she is. One participant likened the Rinpoche to Bodhisattva Mañjuśrī who wields a sword that cuts through all delusions. Everyone said they felt like the Rinpoche was speaking directly to them and about their issues. They all found her teachings to be very helpful, giving them a lot to think about and to put into practice with.

From the Teacher: Effortlessness in Practice

NOTE: We apologies for any advertisement you may see during video play. These ads are inserted into the videos by YouTube. Neither Dharma Time (publisher of these recordings), nor Chicago Buddhist Meditation Group profits from these ads. Thank you for your understanding.

Dharma Video 2: Ignorance is Clever so Be Careful — by Khandro Rinpoche*

Dharma Video 3: Being Hard on Yourself – Guided Meditation — by Khandro Rinpoche*

How to Deal with the Feeling of Guilt?