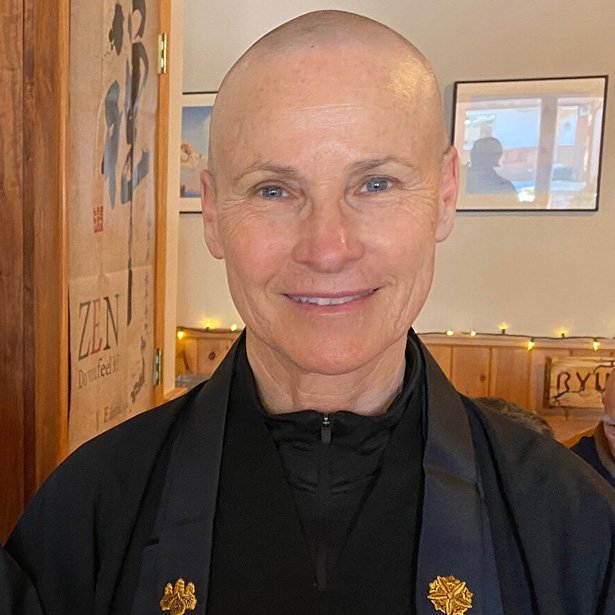 On September 11, 2021, after meditation we watched a Dharma talk by Roshi Konjin Gaelyn Godwin about Edges and Boundlessness. The talk was originally delivered to the Tallahassee Chan Center by invitation by Teacher Guo Gu.

The Roshi talked about employing “edges” in our practice of the boundless mind, and the dynamic between liberation and responsibilities. She began by saying the more we practice, the less we are fixated on certainty, and the more open and boundless we are. Boundlessness means “everything is perfect as it is.” But yet, it is important to use “edges” to bring us something to practice with. This is where we accept and take on responsibilities, i.e., the ability to respond appropriately, and to respond within our ability.

As she shared, on the one hand, great Zen Masters such as Master Dogen had expressed their worries about those who had developed a boundless mind but did not meet their fullest potential because they thought they didn’t need any “edges” anymore – that they didn’t need to follow schedules or take on responsibilities anymore. This is a waste of their potential. On the other hand, she also cautioned that we must know our limits and not take on too many edges/responsibilities, else it would tire us out. Just as the story she told about the “exploding head Bodhisattva Avalokitesvara” – even great Bodhisattvas, when taking on too much, experience burnout. She encouraged us to just be one of the hands of the thousand-hand Bodhisattva Avalokitesvara – don’t try to be all hands at once; and perhaps pick just a small hand if that’s what fits our size of ability.

The Roshi further expounded on the six paramitas – where each one presents opportunities to show us our edges, and as we practice those edges, the power of the paramitas would increase. She also explained the additional four paramitas that are mentioned in some sutras – those four paramitas assist the perfection of the first six. One of those four is Aspirations or Hope, which assists the perfection of Effort. The Roshi reminded us to not confuse our effort with our hope. Hope is the power, effort is the result. It can’t be measured. Aspiration is what we cultivate. If we concentrate on measuring our effort, we would tire out. By aspiring to be helpful and to heal the world, while not measuring our effort, this naturally enhances our efforts without us feeling burnout.

After the talk, several members expressed how this new concept of “edges” gave them a lot to reflect upon; that it helps bring them to a more focused and grounded state. The discussion included mentions of how boundlessness and edges are not opposing ends – instead, they assist each other to help bring on our full potential; how having constraints is important for our growth; and how skillful means and disciplines help us be more effective in practicing with our edges.

From the Teachers: Edges and Boundlessness – Practice with Responsibilities and Aspirations

The video posted below is set to begin with the Roshi’s Dharma talk at 00:30:48. The full recording contains other segments as follows:

NOTE: We apologies for any advertisement you may see during video play. These ads are inserted into the video by YouTube. Neither Tallahassee Chan Center (creator of this recording), nor Chicago Buddhist Meditation Group profits from these ads. Thank you for your understanding.

* Roshi Konjin Gaelyn Godwin is the Abbot and Guiding Teacher of Houston Zen Center. She also serves as the Director of the International Division of Soto Zen, North America (a department of Soto Zen Headquarters based in Japan). Roshi received ordination as a Zen Priest in 1991, from Tenshin Reb Anderson, Senior Dharma Teacher at San Francisco Zen Center(SFZC). She received Dharma Transmission, in 2003, and was appointed Kaikyoshi (formal recognition from Japan) in 2005. Her Zen training began at SFZC in 1985 and continued for 18 years there, including 12 years at Tassajara Zen Mountain Center. She also trained in Japan, at Hosshinji with Harada Sekkei Roshi in 1991–92, and at Zuioji in 2005; and with Robert Aitken Roshi of the Diamond Sangha in Hawaii in 1995–96.