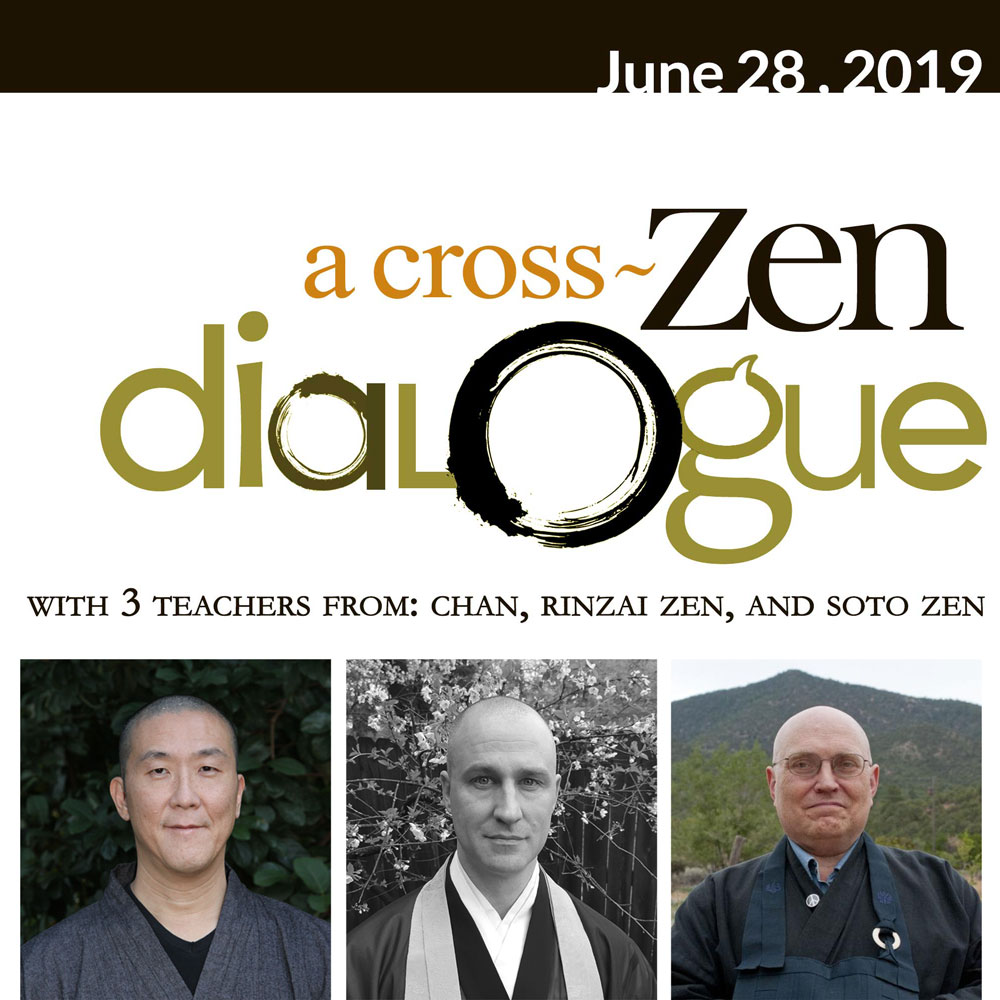 On June 28, 2019 evening, about 80 participants from many different sanghas and lineages in Chicago and beyond attended the “A Cross-Zen Dialogue” event. This event brought the three teachers Rev. Taigen Dan Leighton of Ancient Dragon Zen Gate (Japanese Soto Zen), Meido Moore Roshi of Korinji Monastery (Japanese Rinzai Zen) and Guo Gu of Dharma Drum Mountain Tallahassee Florida (Chinese Chan) together to discuss the similarities and differences between the approaches that each of their traditions takes to Dharma and practice. In the first part of the moderated segment, the teachers discussed the use or practice of koans, huatou, silent illumination, and shikantaza, and bringing meditation/zazen into everyday life. The conversation then turned to how Zen and Chan are, or should be, evolving and adapting to the Western culture. Finally, several members of the audience raised thoughtful and heart-felt questions for the teachers.

The first part of the conversation showed that, while each lineage’s practice approach emphasizes different aspects of the same teaching, or attempts to illuminate the truth in a different way, they are each ultimately pointing at the same Dharma, through a process of discovering: “what is this?”. And interestingly, despite the typical categorization of Rinzai focusing on koans, and Soto focusing on “just sitting,” there are actually elements of each in the other lineage – the questioning and koan studies in Soto albeit in perhaps a more gentle manner, and the embodiment of one’s own nature in Rinzai similar to what Japanese Soto founder, Dogen, taught in shikantaza. A discussion on kensho (seeing the self nature) also brought up an interesting conversation on what that entails, and how “kensho” could actually be understood as a verb.

In bringing Zen and Chan to the West, the conversation highlighted issues of diversity and inclusion. There might not be a need to force changes in approaches to the teachings (although these may come organically over time), but we should make efforts to ensure that all are welcome, either as laity or teachers. There is also a role for everyone in practicing Engaged Buddhism in their own way.

In the open question period, the audience asked further questions about some of the concepts in the practices, and also started a conversation about how it could, or should, manifest in everyday behavior. The overall theme for the evening was that all the practices and lineages represented by the three teachers have much more in common than they differ, and that no single approach is better for everyone.

Listen to “A Cross-Zen Dialogue” :

RECORDING CREDIT: Special Thanks to Mr. Gerhard Barth of Shambhala Meditation Center of Chicago for recording the audio of the event for us!

This Cross-Zen Dialogue event was co-organized by Chicago Buddhist Meditation Group and Dharma Drum Mountain Buddhist Association Chicago Chapter, with the purpose of helping to bridge understanding between different traditions, and to bring practitioners from different sanghas together to build new relationships. We hope that the event has planted seeds for more future collaborations between sanghas, in their efforts to spread Dharma to benefit more people.

Our deepest gratitude to the three teachers for their tireless efforts in spreading Dharma in the West, and for their generosity in sharing wisdom with the audience at this event. We also thank all the volunteers, donors and supporters, as well as the attendees, for making this evening a success.

In order to continue to exercise cautions and to ensure the safety of all our members, we are extending our online group practice until further notice.
We remain hopeful that we will be meeting in-person again before long. Sign-up to receive our weekly newsletter to get the latest updates.

If Zoom is new to you, watch this video on how to join a Zoom meeting.

May all beings be safe, healthy, and at peace.

"The Core Principles of Buddhadharma"
All Special Event Reports >