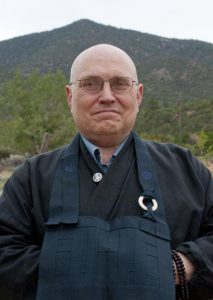 Taigen is a Soto Zen priest and Dharma successor in the lineage of Shunryu Suzuki Roshi. Taigen first studied Buddhist art and culture in Japan in 1970, and began formal zazen and Soto practice in 1975 at the New York Zen Center with Kando Nakajima Roshi. In 1979, he began working full-time for the San Francisco Zen Center, and was ordained in 1986 by Tenshin Reb Anderson Roshi. Taigen practiced and resided for years at San Francisco Zen Center, Tassajara monastery, and Green Gulch Farm Zen Center. He also practiced for two years in Kyoto, Japan, 1990-92, translating Dogen with Rev. Shohaku Okumura, and practicing with several Japanese Soto Zen teachers, including one monastic practice period. Taigen received Dharma Transmission in 2000 from Tenshin Reb Anderson Roshi, and is an authorized Kokusaifukyoshi (Official Foreign Representative) as well as a recognized teacher in the Japanese Soto school.

At the beginning of 2007 Taigen relocated to Chicago, and has served as the Guiding Dharma Teacher for Ancient Dragon Zen Gate since. Through this lively sangha, Taigen works to develop accessible practice and training programs in the Chicago area. He is now focusing on developing Ancient Dragon practice and sangha leaders to lead the sangha into the next generation.

Taigen has also long been active in various Engaged Buddhist programs for social justice, peace, and environmental activism. He obtained an East Asian Studies degree and studied Japanese language at Columbia College, and has a Ph.D. from Graduate Theological Union in Berkeley, where he has taught since 1994, along with teaching at various other universities. Taigen still teaches at GTU online from Chicago. He is a prolific author with books including: