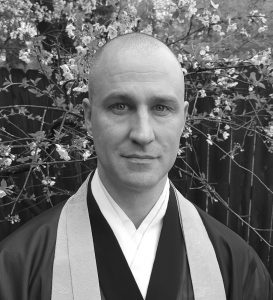 Meido studied under three Rinzai Zen masters: Tenzan Toyoda Rokoji (under whom he also endured a severe training in traditional martial arts), Dogen Hosokawa Roshi, and So’zan Miller Roshi. All are in the lineage of Omori Sogen Roshi, a famous 20th Century Rinzai Zen Master who was also renowned as a master of calligraphy and swordsmanship.

In 2008 Meido Roshi received inka shomei (“mind seal”), designating him an 86th-generation Zen dharma heir and a 48th-generation holder of the lineage descended from Rinzai Gigen. He has completed the koan practice of his line and is empowered to transmit the full range of Rinzai Zen practice methods. Like many of the teachers in this lineage, his instruction stresses the embodied nature of Zen realization, often making use of physical culture and fine arts as complementary disciplines. In particular, he has stressed instruction of the internal energetic practices transmitted in Rinzai Zen.

Korinji is a monastic residence in the Rinzai Zen Buddhist tradition, located on 17 forested acres near Reedsburg, Wisconsin, and it officially began operations in 2018. Meido serves as the first abbot of this monastery. He is also author of the book: The Rinzai Zen Way: A Guide to Practice.