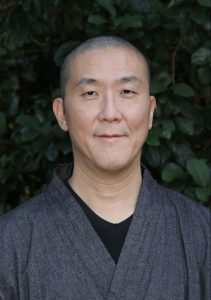 Guo Gu first learned meditation when he was four years old in 1972. In 1980, he began learning meditation from Master Sheng Yen (1931 – 2009), a Chinese Chan master and founder of Dharma Drum Mountain. In 1991, after college, Guo Gu was ordained as a monk and became Master Sheng Yen’s first personal attendant. He assisted the master in leading activities at the Chan Meditation Center in New York, Dharma Drum Retreat Center in New York, Dharma Drum Mountain in Taiwan, and other parts of Europe and Asia.

In 1995, Guo Gu had his first Chan experience, and was given permission by Master Sheng Yen to teach Chan independently. He received several affirmations of his subsequent experiences, including being verified by the Rinzai Zen master, Noritake Shunan Roshi of the Myoshin-ji Zen lineage in June 2007. Guo Gu has led numerous intensive Chan retreats in both the Silent Illumination and Huatou methods.

In 2000, Guo Gu left monasticism and re-entered the lay world. In 2008, he received his Ph.D. in Buddhist Studies from Princeton University and began teaching Buddhism and East Asian religions academically as an Assistant Professor at Florida State University. In 2009, he founded Dharma Drum Mountain Tallahassee Florida (aka the Tallahassee Chan Center), and serves as the teacher there. He is also the guiding teacher for the Western Dharma Teachers Training course at the Chan Meditation Center in New York and the Dharma Drum Lineage. Guo Gu is author of the books: “Passing Through the Gateless Barrier: Koan Practice for Real Life” and “The Essence of Chan: A Practical Guide to Life and Practice according to the Teachings of Bodhidharma.”